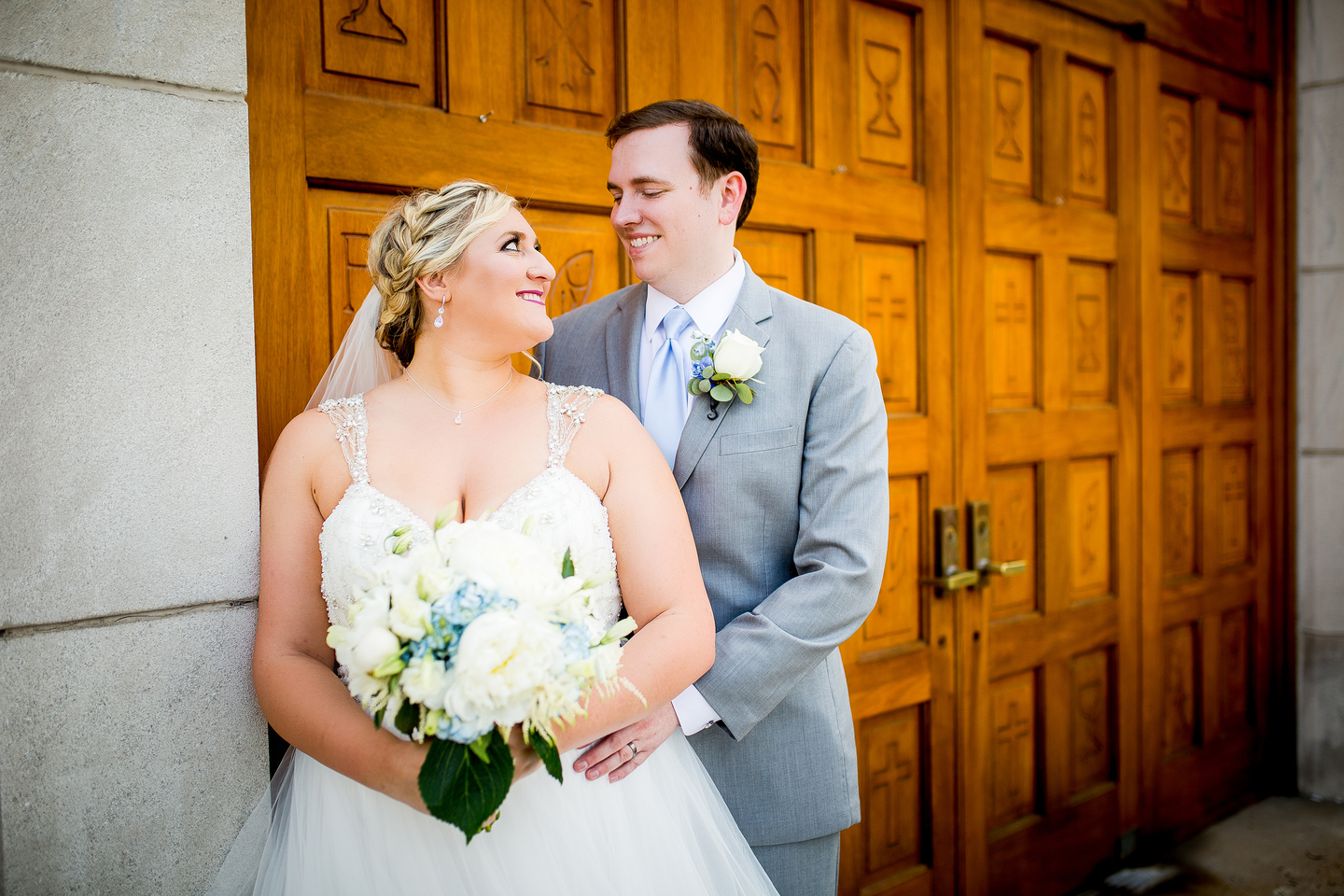 With beautiful blue hues paired with ivory, gold, and greenery accents, Alan and Nicole’s Hutton Hotel wedding couldn’t have been more beautiful. Not only that, but these photos captured by Bryan Fay Photography prove that this couple knows how to have some fun, including a super funny first look. They even chose the dog friendly hotel so a very special member of their family could take part in their day. Keep scrolling to see some of our favorites and read more about their Nashville wedding!

Nicole: Everything I had imagined or wanted came to life on May 25th 2019. The day started at the Hutton Hotel getting ready with my bridesmaids, mother, and my dog, Remi! The Hutton Hotel is a dog friendly hotel, so I was lucky enough to have my 3-year-old dog be by my side the whole day. After finalizing my hair and make-up, I was able to finally get into my dress which I ADORED! A ballgown with a beaded bodice and an allusion back with stunning beading and detailing and a kerchief layered hem. After the girls were ready, we loaded into the limo to head to St. Henry Church for the ceremony.

I wanted to be the first time Alan saw me when I was walking down the aisle, but I also wanted to prank Alan to calm his nerves a little before the ceremony as he hates being the center of attention and he was so nervous leading up to the big day. While in the limo, I got a video from one of his groomsmen showing me that the prank had been pulled off and Alan thought it was hilarious. When he opened his eyes and expected to see me, he actually saw his best man, Jacob, in a wedding dress!

Nicole: After the ceremony, the wedding party loaded onto the limo where we headed back to the Hutton Hotel for our reception. The ballroom was stunningly laid out and half the tables had tall centerpieces and half had short centerpieces of blue and white hydrangeas, cream colored roses, and eucalyptus leaves.

We had a taco bar, pasta bar, and a carving station with ham that was to die for and an all-you-can-drink bar with beer, wine, and a signature Yellowhammer cocktail. Alan and I met at the University of Alabama and their main drink is the Yellowhammer which comes in a signature plastic cup that you keep so we re-created the drink and I had custom cups made that were modeled after the cups you get at Gallettes which is the bar they are served at in Alabama.

Nicole: We had a photo booth set-up for guests to enjoy plus a coffee bar for everyone to perk up a little. Once announced and starting our first dance, our dog Remi joined us in a doggy tuxedo at the end and everyone went crazy!

The night continued with great food, great drinks, lots of dancing and an overall fabulous time with loved ones. The reception concluded with a “shaker send-off” which had University of Alabama and University of Florida colored pom-poms. I had also attended the University of Florida and needed to represent both of my schools. Everyone lined up and started shaking the pom-poms and cheering as we exited entered into the elevators. Perfect end to the perfect day.

We can feel the energy through these photos Bryan Fay captured so we can only imagine how it was in person. SO awesome. Thanks so much to Nicole and Alan for sharing their Hutton Hotel wedding with us!

The wedding pros featured below are part of the NBG Vendor Guide. Take a look at their profiles to learn more and inquire about their services!