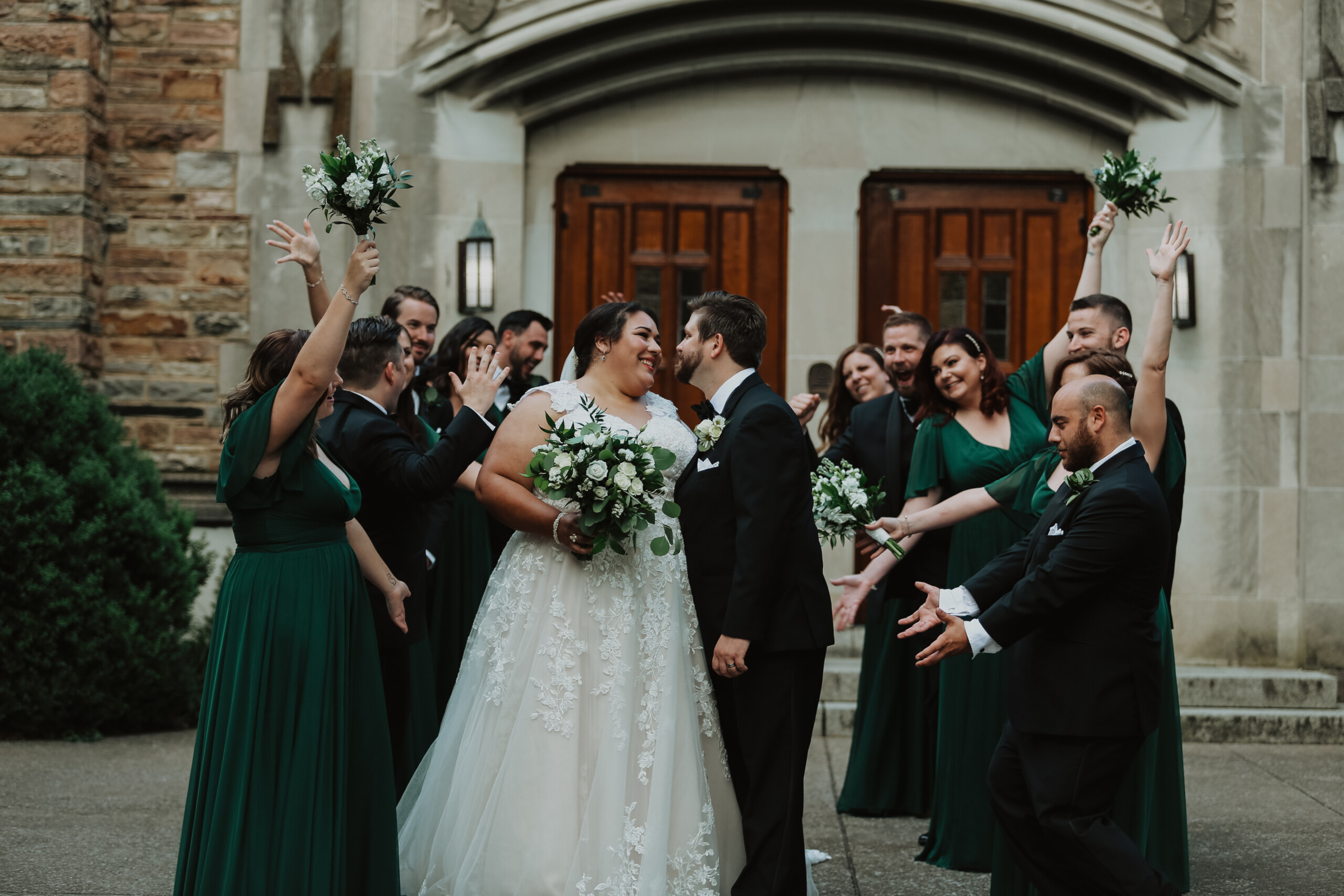 Blooms with greenery, romantic lighting, and venues with pretty architecture, MaryBeth and Rick’s wedding has got it all. Wanting to blend southern elegance with a royal feel, they opted for a regal inspired wedding with rich emerald green hues really playing up the contrast of the details. With MaryBeth in a beautiful floral applique wedding dress and Rick in a timeless black and white tuxedo, the two united with a ceremony at The Scarritt Bennett Center followed by a reception at The McConnell House. We love the natural beauty that shines through these photos by ValCinema. We’re pretty confident you’re going to love them too!

MaryBeth: Our favorite holiday is July 4th—the atmosphere, the patriotism, and of course, the fireworks. Rick was planning on getting us on top of a roof to view the Nashville fireworks as we had done the previous year. All day, we met with friends and went to local events throughout the city before the big evening show. Rick was very adamant about getting great photos this year and was oddly concerned with what I was wearing for the photo. I didn’t have a clue and thought nothing of it as I wanted better photos as well. But what I didn’t know, is that Rick had planned this event for months— as in every family member and friend basically knew before I did. He had gotten help from his friend to hold the ring in the restaurant safe the day prior! Around 8:30 we climbed to the roof where we waited for the fireworks to start. Other servers and bartenders had climbed up too wanting to catch the best views. The fireworks began, and one of the servers asked for a group photo, so they all stepped away from us. I was oblivious and just watching away when Rick came up beside me. He said “This moment’s almost perfect.” I said yes, with a big smile. He began to kneel and said “It would be even more perfect if you agreed to be my wife.” In a total shock and instant tears, I said “Are you sure??” and yelled “YES!” all at the same time. The other rooftops noticed the proposal and started clapping and yelling which then turned into an epic “USA” chant going along with the fireworks.

MaryBeth: I loved the Royal Weddings. The beautiful venues and statement florals. I wanted the rooms to speak for themselves and be a statement. I wanted it to be classic and romantic and all over “Royal”.

What details were used to create your theme?

MaryBeth: I loved emerald green and the crisp contrast of white flowers. I really loved the natural floral element. I think I told my florist “imagine you’re in Ireland and have just picked a bunch of wild greenery and flowers and then found an old Stone church” She creates that vision perfectly. Large statement table centerpieces with flowers. Soft bouquets and boutonnières.

MaryBeth: Dress. It was the thing we splurged one as well as the fitting. That thing was tailor made to me. Save- flowers! We rented centerpieces and were able to transfer and reuse at the reception. Plus we utilized silk flowers as greenery didn’t need to be real for the look.

MaryBeth: Make a Top 3 of what’s important and make sure it aligns with your fiancé and family. We knew that the dress, photos/videos and food were key. Those are things we wanted to be remembered. Budgeting is so important. Ask about savings and things that can be sourced by you. Also If those 3 change that’s ok. I thought I could survive planning my wedding alone and decided for my mental health and of my mothers, that a planner was needed.

MaryBeth: The reveal with my bridesmaids. Them seeing the whole thing was really special and emotional. A funny moment was that our dear photographer was trying to get the shot of my dad and I down the aisle once we passed the doors but she stepped on my cathedral length veil and it popped off. It was so funny in the moment because everything had been perfect. No one knew I’d lost my veil since they couldn’t see it. But it worked out for the best because everyone was able to see the detailing of my dress and nobody noticed at all. Plus it erased any nerves I had of walking down the aisle. I just wanted to tell Rick how funny it was that it has happened.

MaryBeth: Pulling off a wedding is hard, doing it during Covid was almost impossible. My fiancé and Lauren from The Get Together were my rocks. We found ways to create the dream wedding I envisioned even with the cities restrictions and rules. It was perfect and ended up being exactly what I dreamed.

I think it’s safe to safe they nailed their vision perfectly!! Thanks MaryBeth and Rick for sharing your regal inspired wedding at The McConnell House with us!

The wedding pros featured below are part of the NBG Vendor Guide. Take a look at their profiles to learn more and inquire about their services!

Peyton + Seth 💛 After meeting at a New Years E

It's a tough decision trying to decide what to gif

Ready to make your dream wedding come true? Then i

Y'all - our friends at @burdocfarms are running an

Congrats to @sketti_sketti! You just won all of th

A modern, blank canvas infused with an industrial,